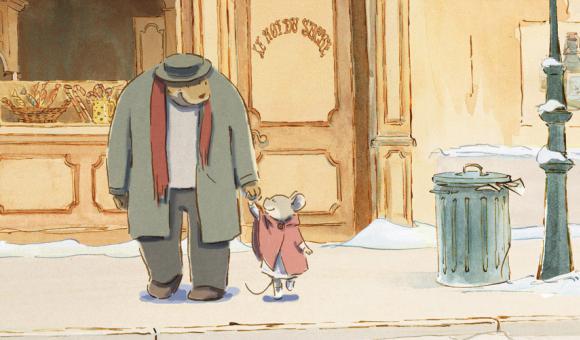 Ernest and Celestine is an animated film released in France in 2012 by La Parti Productions and in the United States 2013 that has garnered attention for it’s beautiful art and style at first glance and captures with a deeper story commenting on the mob-mentality of society and the role of artist to break those conformities.

In it’s story, Celestine is an orphaned mouse that collects bear teeth from the City Above for a dentist who lives in the City Below, the mouse city. She befriends a bear scraping by for food with his music and they become unlikely friends. However, it is an affront against both of their societies for a mouse and a bear to be friends so they run from the places they are outcastes from while creating a powerful bond with each other. Over time we see how each of them grow and question the stubborn and problematic traditions of their societies and eventually use their own logic and awareness to even save their kind.

From its visual aspect the movie holds a visual charm. Much of the character designs are simplistic, but through stylization of movement and facial expression they become more dynamic. It’s hard to talk about the visuals of this movie without talking about the coloring of the movie that appears like watercolor and comes into parallel with Celestine and Ernest’s desires to become artists. It’s blend of soft subdued colors meld beautifully with the characters and their environments to the point where even some of its gags and motions take advantage of the style and color within the movie.

Ernest and Celestine is a beautifully crafted film with so much love and dedication for art put into every scene and frame.