It’s less than 24 hours (!!) before the 5th edition of Cartoons Underground kicks off with a bang! In an exclusive interview, we speak to Vicky Chen, Co-Founder and Festival Director, Tan Wei Keong, Program Director, and Jia Lee, graphic designer/illustrator responsible for the brand-new CU identity and the beautifully illustrated poster for this year’s festival! 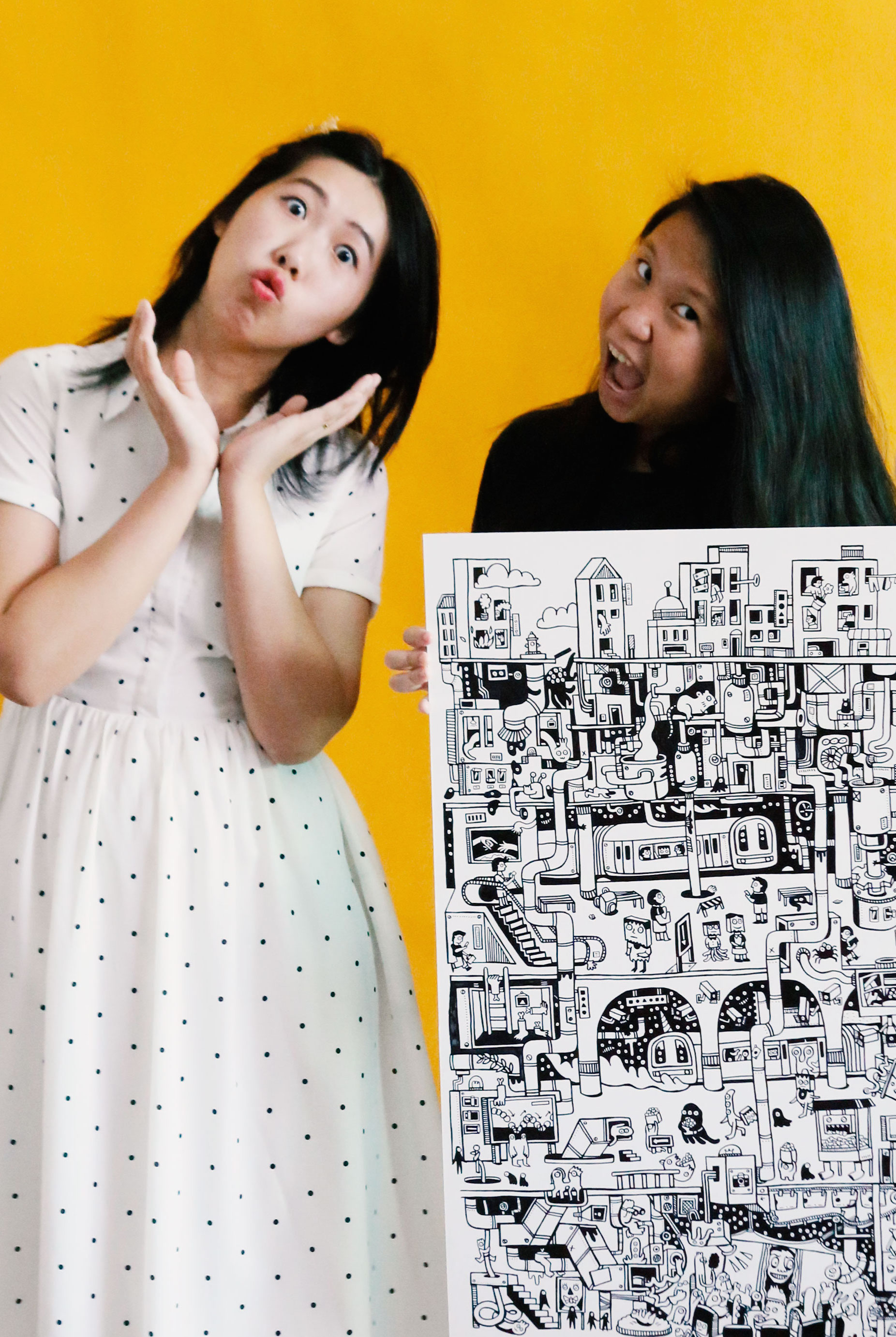 Cartoons Underground: What makes CU such a unique alternative to the other usual film festivals?

Wei Keong: Cartoons Underground breaks boundaries and pushes limits and expectations on what animation should look or be about. The 20 films selected from almost 500 submissions from around the world, dealt with themes uncommonly seen within the animation medium, and are exceptionally well-done with technical diversity. ‘In Other Words’ by Israeli director Tal Kantor, is a great film on an adult theme of estrangement between father and daughter. She blends live-action footage with traditional drawn animation, which resulted in magical visuals. This year’s program was curated with the Singaporean audence in mind. There has always been a gap between auteur and commercial animation in Singapore, and we hope to bridge that by bringing in works by international animation artists and shining a spotlight on our artists who are in the right direction.

CU: Now that the festival is at the five year mark, you have seen it grow like a child, what do you see as the future of CU?

Vicky: Haha, funny that you say that, Cartoons Underground really is like a child to me! While I’m protective over it and what Cartoons Underground is about, it is still a community driven festival, and that means that the idea of Cartoons Underground can and needs to be shared in other countries. I see the festival growing through connections with people from different countries who would want to start similar underground animation festivals in their home country. When we first started out, it was in a bar, and look how it has grown! The most important part would be maintaining the true essence of Cartoons Underground. That could mean having the screenings in a bar, or even as an online film festival with directors on Google Hangouts!

This year, Cartoons Underground underwent an identity revamp – a rebirth if you like. Jia Lee (artjelly.com), a graphic designer who graduated from Rhode Island School of Design (RISD) with experience as a designer in Apple, is the artist responsible! If you live in a hole somewhere (underground perhaps?), and have yet to see it, here’s the brand new logo of Cartoons Underground :

CU: What was the inspiration behind the new branding identity of cartoons underground?

Jia Lee: Googly eyes! There’s something very curious and quirky – maybe even a little creepy – about googly eyes. That’s very true of the festival itself, it’s a bit weird and doesn’t take itself too seriously! The eyes, peering out from the depths of the logo, is suggestive of underground culture as well. You can’t help but consider the creatures or monsters lying behind those eyes.

CU: As a graphic designer, what is it about animation that fascinates you?

Jia Lee: It’s absolutely amazing! I’ve dabbled in hand-drawn animation myself, and I have nothing but utter respect for animation and animators. I think it’s mind-blowing how experimental, imaginative and absolutely crazy a medium it can be. Some of the animations from this year’s festival look like they’ve escaped from the most lurid of nightmares, in a way that seems impossible to capture or begin to visualize in film.

– A small excerpt from the Official Poster –

CU: Could you share more about the process of creating the poster? What was your idea / inspiration behind the work?

Jia Lee: The poster’s process is unique in the sense that it’s more of an unplanned doodle. I start somewhere, and pretty much “grow” the drawing, inventing things along the way. In a nutshell, the poster portrays monsters and humans above and below ground, living in co-existence. The monsters are hiding in plain sight; they’re wearing paper bags on their heads, lurking in the shadows. It quickly becomes clear that they’re trying to get to the festival itself – via a well-timed MRT breakdown! I think the poster’s really trying to appeal to the more rebellious, counter-cultural side of our audience, maybe even hinting that the festival’s really for the artists and misfits at heart.

CU: Any favorite artists / influences on your work, favorite animated films?
Vicky: I’m not an animator, but have dabbled in animation, and do draw and paint though not as often anymore. I love animated films that tell the stories from their country, be it Adam Elliot’s Mary and Max, or Sylvain Chomet’s The Triplet of Belleville (2003). I guess for the more mainstream favourites, they are Despicable Me, Wall-E and Inside-Out. Pixar, Illumination, and many studios are doing such a great job with story telling and making supposedly “children’s movies”, a lot more insightful and interesting for adults. Other favourite animated TV shows would be MTV Daria, or F is for Family by Bill Burr, and Cartoon Network’s Adventure Time.Jia Lee: It’s really, really difficult to choose one! But I’m going to go with Caleb Wood (check out his vimeo!!), because I’m always impressed and envious at how well he blends a clean, graphic aesthetic with effortless, spacious animation.

CU: If there’s one person you could have coffee with, who would it be and why?
Vicky: This is a difficult one, but probably Amanda Palmer and Neil Gaiman, they’re both great story tellers, be it through music or a book that helps make you feel less alone. And honestly just seem like really cool people to hang out with.

Jia Lee: It would be a tie between Douglas Adams, whose books make me laugh, and Jacqueline du Pre, whose music makes me cry. Sadly, both are long gone, but I guess that’s why I’ve chosen them for this hypothetical question!
CU: Thank you for your time! All the best for the festival, happening tonight!! If you have not seen this, check out the latest festival trailer below for a sneak preview of all the amazingly exciting things you will stand to miss if you don’t come for the festival!