Eat Pray Bird is the graduation film of Jeremy Teo, Huang Ji and Derrick Fun, made during their final year at NTU School of Art, Design and Media (ADM). In November, their CG animated short made waves across Asia, winning the “Special Mention Award” at the 18th DigiCon6 ASIA Awards Ceremony held in Tokyo, Japan. This was after they clinched the “Next Generation Award” in the Regional Awards (Singapore), and was invited to represent Singapore at the competition in Tokyo. 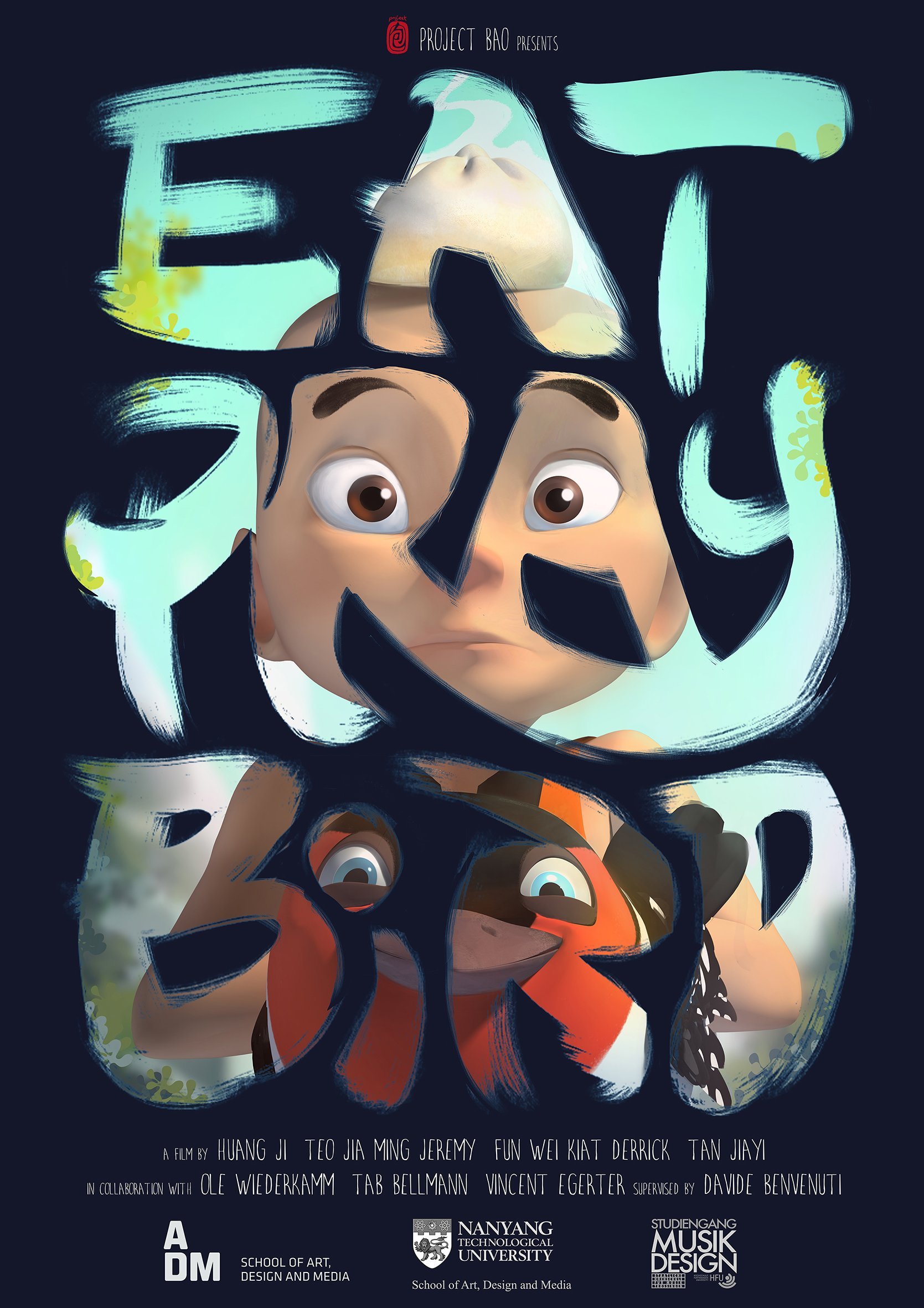 Synopsis:
An apprentice monk is tasked to endure 7 grueling days without food or rest in a secluded bamboo forest amongst the mountain peaks. The monk came prepared with food to cheat, but was held back by his master’s presence. A hungry bird steals his food and now he has to get his food back without alerting his master. The bird however, proved to be an evenly matched adversary, and the monk grows desperate while he struggles for survival. In the delicate balance between the master’s watchful gaze and the feathered annoyance, the monk finds enlightenment in the most unexpected way.

Cartoons Underground: Could you tell us more about what got you all into animation? Your inspirations and influences?

Jeremy: I loved illustration, comics, video games and manga while growing up, and chose to major in animation as it seems the closest fit to my interests. I never imagined that it would draw me into its wholesome nature as a visual storytelling form. My main influences include James Jean’s illustrations, Kinu Nishimura of Capcom, Eiichiro Oda’s story genius, Final Fantasy IX, and director Brad Bird.
Derrick: I grew up watching a lot of anime and playing a lot of games, it would be a dream for me to work on a renowned title seeing my creations come to life on screen. My inspirations and influences come mainly from the stuff that I watch in my childhood and teenage years: Ridley Scott for Blade Runner, Mamoru Oshii for Ghost in the Shell, Hideaki Anno for Neon Genesis Evangelion, to name a few.
Huang Ji: Most of my inspiration came from watching cartoons growing up. I grew to love CG animated films like Toy Story, and the fact that I loved playing games naturally led to me studying animation. 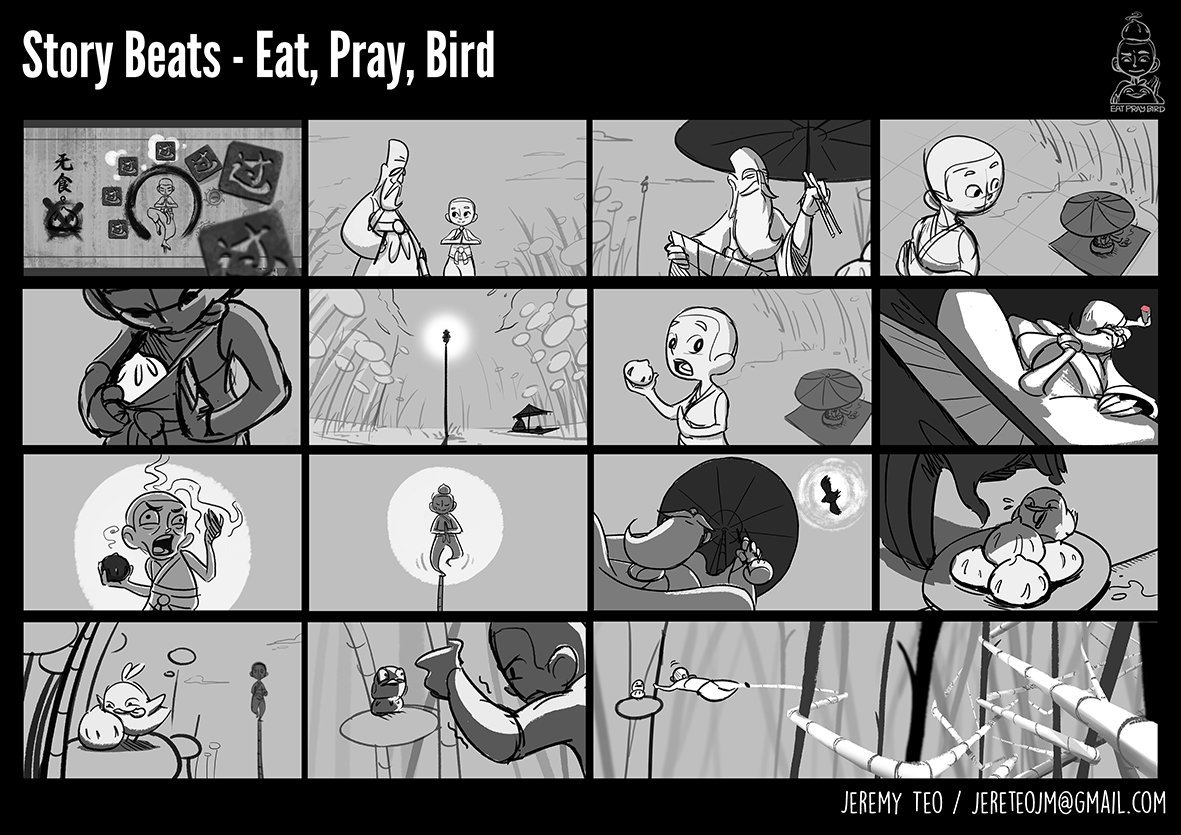 CU: What was the seed inspiration for your film Eat, Pray, Bird and how did the story develop?

Jeremy: Huang Ji and Derrick were developing an idea about a monk and his test of virtue. In trying to push the story further, I realized that the team’s strengths favored comedy more so than a serious film about morality, with Huang Ji’s exaggerated and snappy animation style and Derrick’s bright beautiful paintings.
Derrick: If I were to put it into one word, it would be determination. We rolled with the idea of a young and foolhardy monk stuck between two influences. Between obligation and desire, it creates a dilemma and an internal dialogue within the monk for us to play around with.
Huang Ji: Comedy and light-hearted films are my favourite, as they leave the audience with a feel-good emotion, especially after a long stressful day. That was what inspired me to come up with an idea that is playful and fun, to brighten people’s day and put a smile on their face.

CU: What was it like working as a team on a single film? What were some of the challenges / fun moments?
Derrick: All of us have vastly different sense of humour, so it was really interesting and challenging for us to come up with a universally good joke even between ourselves.
Jeremy: The three of us had different specialisations, and the pressure was on each of us to helm the different segments of the project. However, this also gave a very clear direction for the project when there was a single lead at each time. It was challenging to foster greater trust between each other, and in resolving disagreements or the dreaded technical problems in CGI, but we did it! Comedy is also tough to flourish during the stress of a final year project! 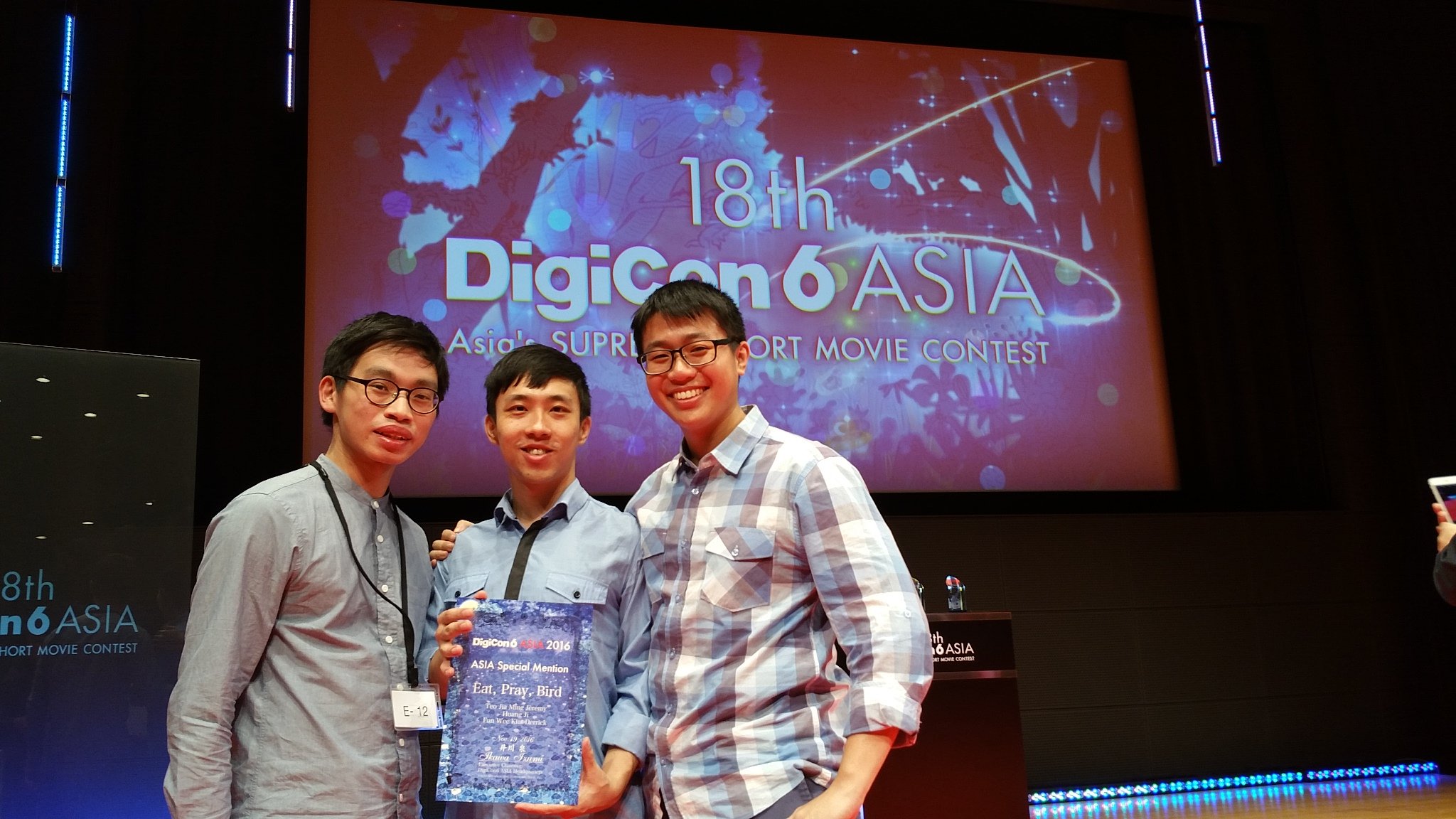 At the DigiCon6 ASIA award ceremony in Tokyo

CU: Your team won the Digicon6 Asia Special Mention award in Tokyo. Congratulations! Could you share what that experience was like?

Jeremy: We received an invitation to go to the main event in Tokyo after the Singapore awards ceremony. Already elated with the Singapore award, my first thoughts were: “Wow, that’s nice of them to invite us!” The award in the Tokyo ceremony really caught us by surprise! The biggest feeling was of gratitude; my thoughts drifted to my teammates, the honest praise and encouragement from the Digicon6 jury, and the people who supported and believed in us. The international recognition alongside other competent filmmakers was a huge affirmation to our hard work, skills and how much we went through. One of them even recorded a special message for us when he couldn’t make it to the ceremony, because he liked our film so much!

Huang Ji: It was amazing! I feel so honoured that we were invited to Japan by the organisers. The surprises just kept coming. First it was the local award and the sponsored ticket to Japan, then we won another award in the Asian festival itself. As I went up on stage to claim our prize, it felt so thrilling and nervous at the same time, being able to address the crowds not only in the theatre but also hundreds of thousands of audiences watching the stream live.

Derrick: Totally unexpected! I was working at that time and couldn’t make it for the awards ceremony, then I heard my teammates say that we won something. I was so proud! When we were specially mentioned during the award ceremony in Tokyo, for a genuinely funny story, wonderful visuals and amazing animation, we thought that all our combined hard work has finally paid off. It was really humbling to see our works touch the hearts of others.

CU: If you could meet anyone in the world for a chat over lunch, who would it be?
Derrick: John Lasseter haha!
Jeremy: Same as Derrick, John Lasseter. He seems like a great guy, and I’d love to pick his brain regarding the art and business of animation.
Huang Ji: Stephen Thompson (an American professional mixed martial artist). He is a very respectable fighter, I would like to sit down with him, not just to discuss the martial arts world, but also tips on how to be successful in life.
Check out the production art, and behind-the-scenes work below! 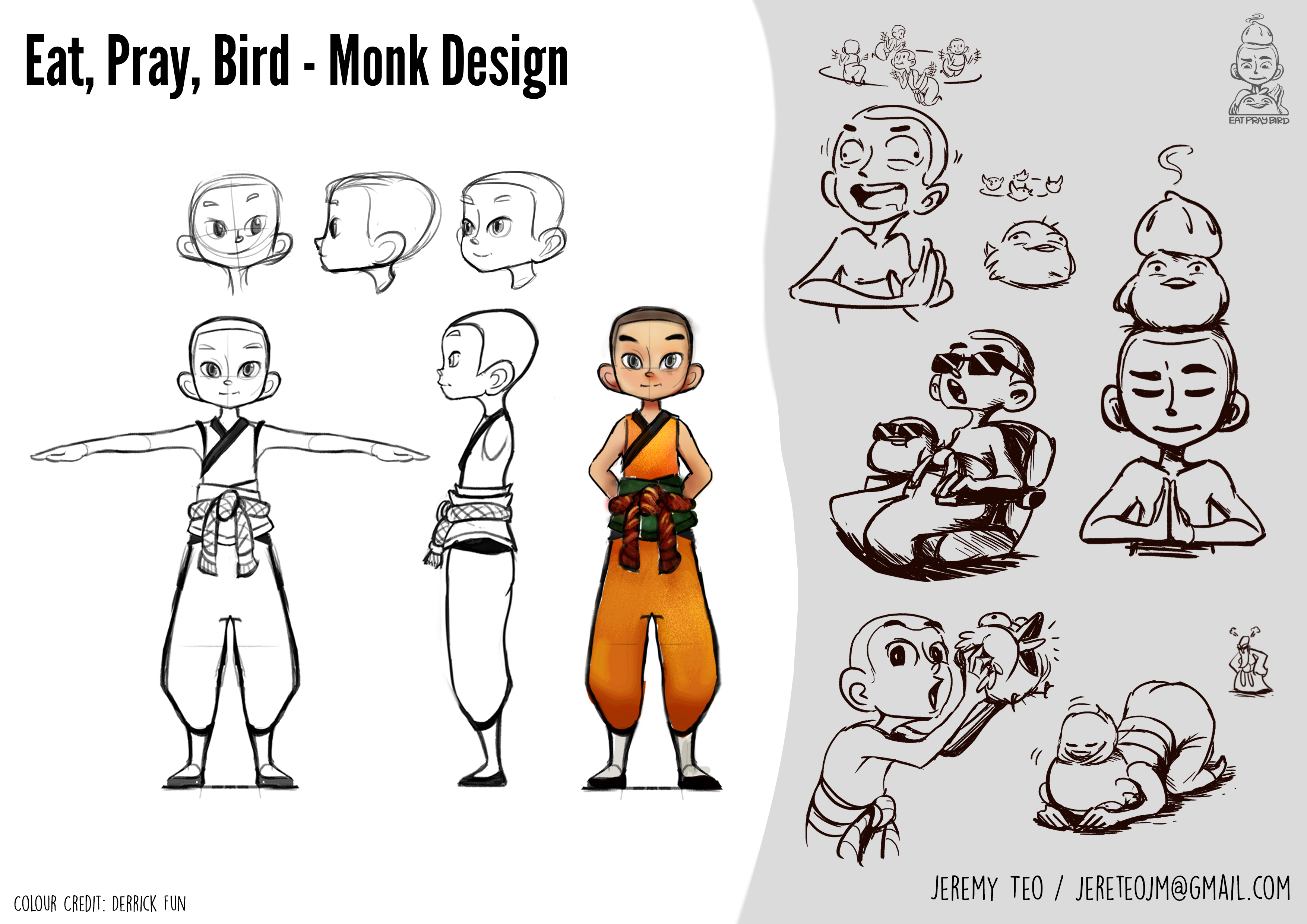 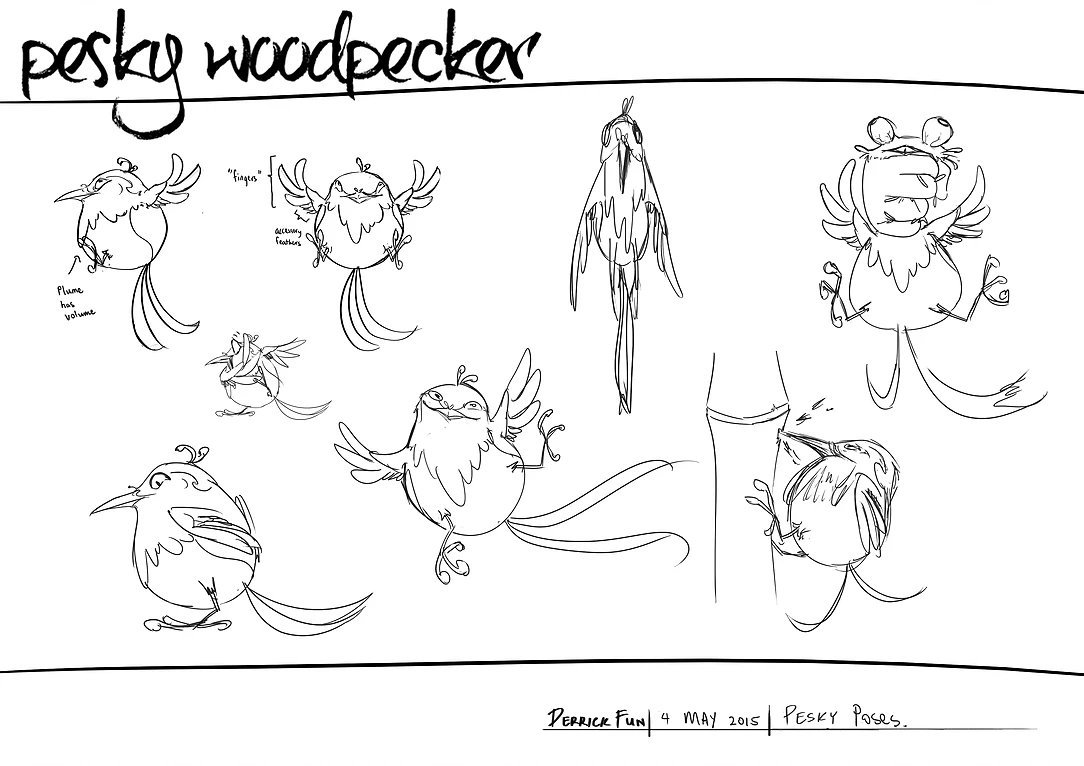 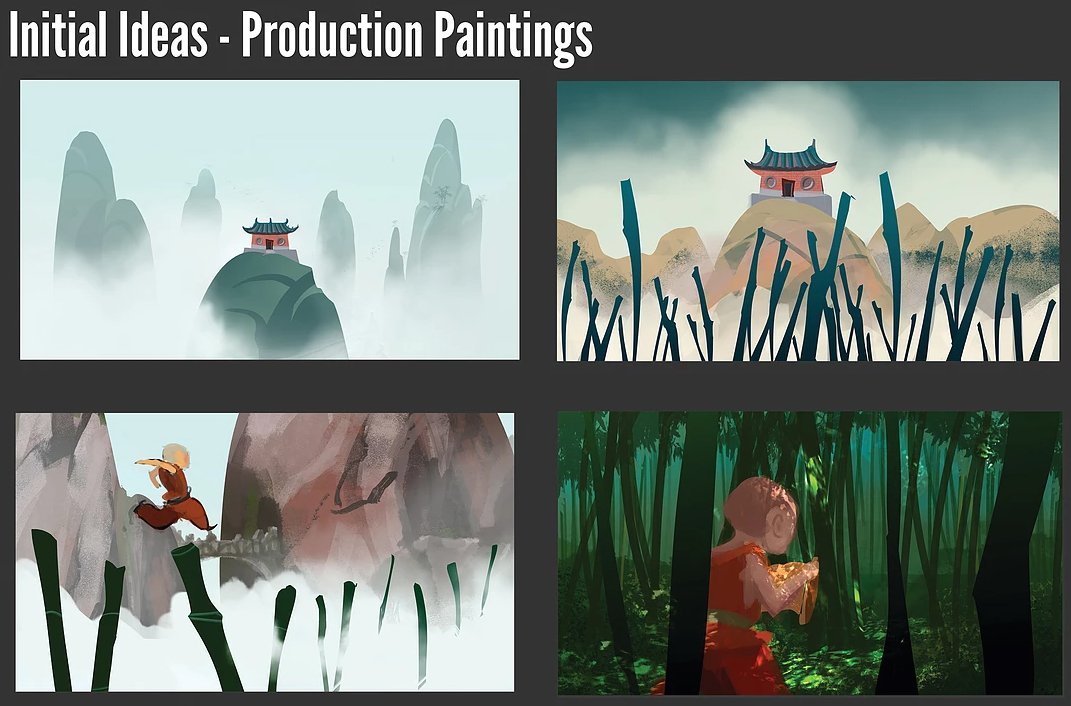 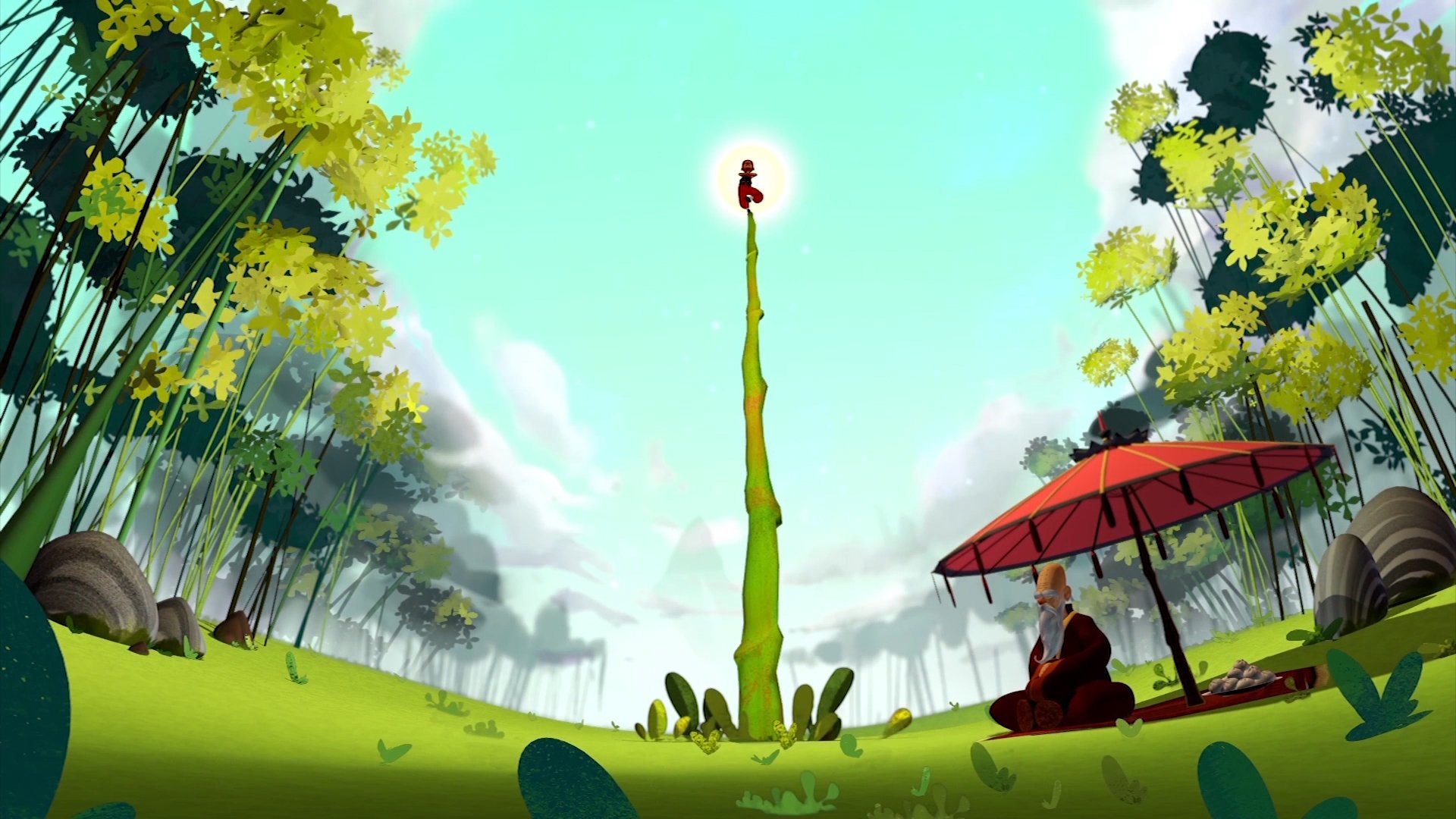